SUNREF East Africa was officially launched in Tanzania on 22nd November, 2016 with the signing of the first credit line valued at 11.8 million US Dollars between the Agence Française de Développement (AFD) and Bank of Africa Tanzania (BoA-T).

The Credit Facility Agreement was signed in Dar Es Salaam by Mr. Bruno DEPRINCE, AFD East African Community Regional Director and Mr. Ammishadai OWUSU-AMOAH, Managing Director & CEO of BoA-T, in the presence of Her Excellency Mrs. Malika BERAK, Ambassador of France to Tanzania, as well as representatives of the Confederation of Tanzanian Industries (CTI) and the Delegation of the European Union. 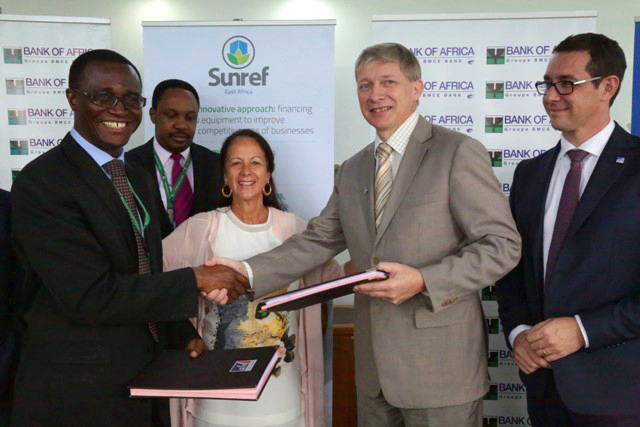 The Credit line will enable BoA –T, the first Tanzanian bank to join the SUNREF program, to provide both short-term and long-term funding at attractive interest rates and longer maturity adapted to both public and private sector clients to implement renewable energy and energy efficiency projects.

The Bank will also benefit from the regional technical assistance program, co-financed with the European Union, to assist them in identifying, developing and evaluating viable renewable energy and energy efficiency investments and strengthening the bank’s capacities in green finance.

Moreover, the program will contribute to reducing the country’s greenhouse gas emissions and dependence on fossil fuels. It will also contribute to increasing the share of renewable energy in Tanzania’s energy mix (solar, hydro-electricity, biomass / biogas, cogeneration, etc.). Courtesy of this funding, AFD is contributing to the fight against climate change and the implementation of the Paris agreement in Tanzania