Ambassador of France H.E. Frédéric CLAVIER inaugurated on 16th September at Dar es Salaam airport with the President of Tanzania H.E. John Pombe MAGUFULI the radar installations sold to the Tanzanian by the Thalès group, French company of the aerospace and defense industry. Four radar stations have been commissioned by the TCAA (Tanzanian Civil Aviation Authority) at the international airports of Dar es Salaam and Kilimanjaro, as well as regional airports of Mbeya-Songwe and Mwanza. TCAA will now be able to monitor all the air traffic of the country. This radar coverage will facilitate the procedures of aviation safety in substitution of the control carried out by radio.

Furthermore, the project will have a positive impact on the development of the Tanzanian air network by increasing the number of foreign companies serving the country, said the Head of State.

Finally, beside to strengthening relations between our two countries, this contract illustrates the influence of France’s know-how in high technology industry. 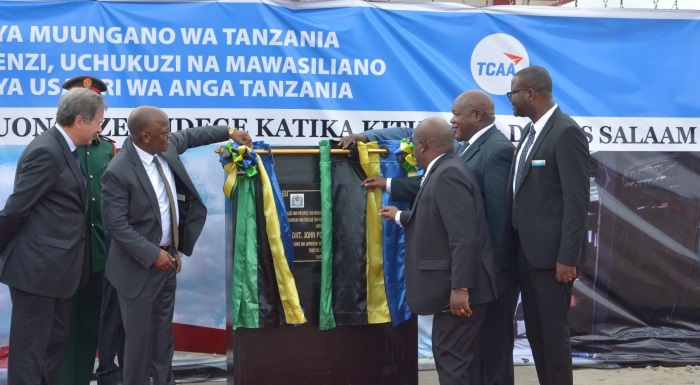 H.E. Frédéric CLAVIER along with H.E. President of Tanzania J.P MAGUFULI and the governmental authorities, at the occasion of the opening ceremony of the Thalès radars at Dar es Salaam airport.

“The French government will continue to be committed to support air transport sector in Tanzania. More broadly France has demonstrated and will continue to demonstrate that it is in support of the country’s development as desired by President Magufuli and that it is together that we will achieve the goal of making Tanzania a middle-income country by 2025.” – H.E. Frédéric CLAVIER, Ambassador of France in Tanzania.

Below, the integral speech of H.E. Frédéric CLAVIER, Ambassador of France to Tanzania, pronounced at this occasion.